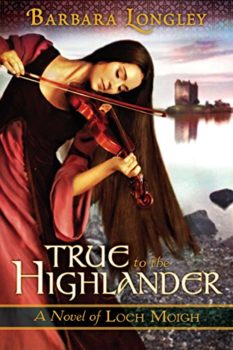 True to the Highlander

Treachery rules the Highlands of 1423. With their king captured by the English, Scottish nobles plot to ransom James behind the back of the brutal regent holding their land in his iron grip. But not every clan wishes to see King James back on his throne…

Sitting atop this powder keg of bloodthirsty rivalries, Malcolm of clan MacKintosh takes the mysterious, lone maiden he finds along his road as a bad omen…though an undeniably beautiful one. When he attempts to save her from a rogue within his own garrison, she deftly brings Malcolm to his knees. Who is this willful lass who has so quickly laid siege to his heart?

Alethia Goodsky has met all kinds working at the New York Renaissance Festival, but no one like the fortune-teller who tasks her with a cryptic life-saving mission and flings her into the fifteenth century. Now Alethia must rely on her wits to unravel the mystery in this violent land. Malcolm has sworn to protect her, but her gifts may soon make her his protector. With enemies closing in, Alethia must choose between finding a way home…and remaining true to her Highlander.

Alethia Goodsky gave all things supernatural a wide berth—and Madame Giselle reeked of magic. The old fortune-teller often followed her around the fairgrounds, popping up whenever Alethia took her breaks—always watching. She couldn’t help but feel uneasy around the woman. Fixing a wary eye on the fortune-teller’s greenand-white-striped tent, she contemplated the two paths before her. The longer route to the parking lot meant an uphill trek all the way around the New York Renaissance Festival fairgrounds, in her gown no less. The shorter path cut the distance in half, but she’d have to pass within a foot of Madame Giselle’s door.

A gust of wind whipped a cloud of dust into her face, stinging her eyes. She gagged on the sour smell of garbage carried by the breeze. Exhaustion tugged her toward the shorter route. As much as she loved her job at the Renaissance festival, weeks of working around the clock had taken their toll.

Shifting the strap of the canvas duffel biting into her shoulder, Alethia started down the hill, her violin case bumping against her hip with each step. Near the tent’s entrance, she clutched the skirt of her Renaissance gown and tiptoed past.

The sound of muffled sobs brought her to a halt. Crying?

Torn, she listened for a moment before compassion won out over common sense. Moving the tent flap aside, she peered in. “Hello, is everything all right in here?”

“No, it’s not.” Madame Giselle had changed out of her gypsy costume and into gabardine slacks, a cashmere sweater and a suede blazer. Riffling through her designer handbag, she resembled nothing more sinister than someone’s upper-class grandmother. She pulled out a linen handkerchief and turned to face Alethia. “I’m glad you stopped by. Come in.”

Alethia really didn’t want to go into that tent, but she’d been the fool who’d lifted the flap, and disrespecting an elder went against the grain. She took a tentative step forward. “What’s the matter?”

“Oh.” Giselle blew her nose into the fancy hanky. “Someone I care about is in grave danger. I’d do anything to help.” She turned red, puffy eyes toward Alethia. “Wouldn’t you if it were someone in your family?”

“I thought as much.” Giselle’s eyes lit up through her teary smile. Dark eyes shining with acuity and something deeper fixed on Alethia. “You grew up on your father’s reservation, didn’t you, near the Canadian border?”

“How could you possibly know that?” The familiar prickle of unease she felt around Giselle cat-pawed its way up Alethia’s spine.

“Not all of what I do is for show.” Giselle arched an eyebrow. “You better than anyone should understand.”

“I don’t know what you mean.” Heat rose to Alethia’s cheeks at the lie.

Gifts? That’s not the word she’d use to describe her abilities. Alethia could read other people’s energy and always knew whether someone was lying or telling the truth. She’d read everything she could about ESP. Her talent wasn’t all that unique. Still, on top of being biracial, her so-called gift made it even more difficult to fit in. “I don’t—”

“There are depths to you not yet tapped,” Giselle added as if speaking to herself. “You’d be able to survive anywhere.” Her eyes narrowed. “You have plans for the future, a carefully laid path already in the works?”

She didn’t know about the tapping depths part, but her plans at least felt like safe territory. Alethia nodded. “I graduate from Juilliard next spring, and I already have a job lined up in Los Angeles.” Pride rippled through her. “I’ll be playing in a Hollywood orchestra that does soundtracks for movies.”

“Sounds lovely.” Giselle smiled back. “Why don’t you sit? That pack looks heavy.”

“I can’t stay. My ride is waiting.” Alethia stepped back, and the air in the tent became charged with an unfamiliar tension. Magic. Giselle’s image blurred and shifted as if it had been superimposed over another’s, more ethereal and insubstantial. Alethia’s heart beat inside her chest like a fly trapped in a glass jar.

She blinked, and the ordinary grandmother in gabardine came back into focus. Not possible. It’s exhaustion, that’s all. Alethia took a deep breath and let it out slowly.

“Stay for a moment.” Giselle pointed toward a rickety chair set close to an equally shabby table. “I thought of you while packing my things.”

Alethia frowned as her legs carried her toward the chair. She didn’t want to sit, much less stay, but she couldn’t seem to turn herself around to march out that door. “You thought about me?”

“Oh yes. I’ve been thinking about you for a very long time.”

“A long time? This is the first festival we’ve ever worked together, and we’ve never even had a conversation. How—”

“Time is relative, Alethia, and completely malleable for one such as myself.”

What the hell does that mean? Despite her desire to bolt, Alethia stayed planted where she was. Giselle mumbled to herself while she rummaged through a plastic bin full of her fortune-telling paraphernalia. Alethia shuddered as she listened.

“Ah, here it is.” Giselle turned back with a pendant on a gold chain dangling from her hands. The charm was an animal effigy made of Celtic knots with a green stone mounted in the middle. “You’ve been so kind, stopping by to cheer me up even though I’m a stranger to you. I want you to have this.” She slipped the pendant around Alethia’s neck.

Alethia traced the intricate design with her finger. The knots formed the image of a crane. Among her father’s people, the Anishinaabe, she belonged to the Crane clan. “It’s beautiful, but I can’t keep this.” She lifted the chain over her head to return it. “It must be worth a fortune.”

“It’s yours.” Giselle caught her hands and pushed the pendant back down around Alethia’s neck. “This was crafted in the Highlands of Scotland eons ago. It is fitting that you should have it. Don’t you think?”

Her mother had been Scottish, a MacConnell, but how could Giselle know so much about her life? The gold chain came to rest with unnatural warmth against Alethia’s skin. Every instinct she had screamed at her to get the hell out of there. Now. “Thanks. Can I pay you for the necklace? I didn’t really do anything to deserve it.”

“Ah, but you will.” Giselle laughed. “I don’t want your money. The pendant is a gift.”

Alethia grabbed her things from the ground, relieved to find that her body finally obeyed her mind. “I hope everything turns out all right with your relative.”

“I am certain it will. Go, child. Your destiny awaits.”

Giselle had obviously played the role of the gypsy fortune-teller far too long. Alethia’s future had nothing to do with destiny and everything to do with hard work, determination and careful planning.

Alethia took a step toward the tent’s exit, and every hair on her body stood on end. An eerie electrical charge filled the tent, along with the distinctive scent of ozone. All the familiar sounds associated with the closing fair faded. A loud clap made her ears pop, and everything flattened in an impossible two-dimensional way.

Pulled by a powerful current, she lurched forward. It took all of her strength to hold on to her things, and she fought to remain upright against the invisible force pressing in on her from all sides. A blur of light and color flashed by in microsecond increments. Nausea and pressure made it hard to breathe. She gasped for air, and pain ripped through her. God, she was being torn apart. I’m going to die. I don’t want to die!

Blackness edged its way in around her as she struggled to remain conscious. No use. The vortex pulled her under.