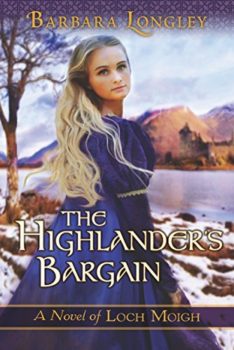 Before he can settle down, blond-haired, blue-eyed Robley of clan MacKintosh needs to taste true adventure. So when the faerie Madame Giselle asks him to retrieve her stolen property in exchange for two enchanted tokens that will whisk him across the centuries, he jumps at the chance.

Nurse and future midwife Erin Durie is broke and alone, thanks to a roommate who skipped town and the psychic gifts that make relationships too intense and painful to bear. Then a kilted man magically drops into her arms, looking for a guide to the twenty-first century, and she can’t deny the attraction. But magical treachery soon throws open time’s portal once more—and puts a blade to Robley’s throat. Now Erin must decide where—or when—her healing powers can do the most good…and whether she can live without her handsome Highlander.

In the second thrilling Novel of Loch Moigh, award-winning author Barbara Longley delivers more of the action, adventure, and romance that began in the pulse-pounding True to the Highlander.

Robley sat in his uncle’s solar, his thoughts drifting like thistledown in a stiff breeze. His father, uncle and cousin droned on and on about their clan’s kine, the condition of this year’s crops, the villagers and the needs of their crofters. He placed his elbows on the table and scrubbed his face with both hands, stifling the urge to yawn.

“Something ailing you, lad?” Robley’s uncle William, the earl of Fife asked, his tone slightly exasperated.

Robley straightened, taking his elbows off the table. “Nay, just a bit fatigued.”

“Mayhap less time spent in the village inn drinking and carousing and more time sleeping at night would no’ be amiss,” the earl scolded.

His brow shot up, but he kept his mouth shut. Since the return of their King James to take his rightful place on Scotland’s throne, Robley’s role in their clan’s welfare had been reduced to that of page. He ran errands, carried messages and aided his father in the execution of his duties as seneschal for the MacKintosh holdings.

Robley’s future, right down to the kine, the crops and the crofters, offered little in the way of excitement. The drinking and carousing gave him a brief respite from the powerful yearning for adventure plaguing him and filling his dreams.

He sorely missed the days when he had a battle or a tournament to anticipate. He missed the adventures he’d had with his brother and cousin while traipsing across the continent.

Malcolm and Liam were settled now with families to raise. Peace had its merits, aye, but naught stirred the blood like a war of wits and brawn.

“’Tis long past time you took a wife, my lad.” His father placed a hand on Robley’s shoulder and gave it a shake. “Your mother and I long to dandle both our sons’ bairns on our knees. We wish to see you settled and content.” Robert turned to his brother “What say you, William? Shall we cast about for a suitable bride for my lad? Mayhap the ladies can recommend a willing lass with a generous dowry.”

Settled? His mouth went dry. He couldn’t be much more settled than he was now, and the tedium was killing him. “Ah . . .”

His cousin Malcolm smirked. “Aye, Rob. ’Tis time you married. Have you no’ said you wished to find a braw and bonnie lass like my True?”

“There are none like your lady here.” He scowled. “Shall I seek the faerie who sent her to you through time, and request she fetch me a bride from the future as well?” Had he given voice to his heart’s desire? Was this the source of his restless obsession? Aye, and truth be told, he wanted to find the lass himself. He yearned to see with his own eyes the wonders the future held: airplanes, automobiles and lights that came on by the mere flick of a switch. These were but a few of the marvels True had mentioned. How could he not turn his mind once again to the fantastic tales she told of her life in the twenty-first century? His obsession. He longed to see the future. ’Twould be his last adventure. How he kent this, he could not say, but the certainty had lodged itself firmly in his gut, and he could not free himself of the notion.

Malcolm shrugged. “My wife was sent here to save a life. That we fell in love had naught to do with Giselle’s purpose, and I dinna suppose her ilk take well to requests of any kind. ’Tis best to stay as far from the fae as possible, lest you get caught up in their machinations. We mere mortals are naught but pawns to them.”

“Aye, keep your distance, Rob.” The earl rose from his chair. “You’ve a responsibility to our clan. One day you will take your father’s place as seneschal, as Malcolm will take mine. I remember what it is to be young and restless, but have a care. The well-being of our people rests squarely upon our shoulders.” He fixed Robley to the spot with a stern stare. “Come. We’ve work to do, and the hour grows late.”

“I ken well my responsibilities, Uncle.” He pushed his chair back and stood, chafing at the scolding. He was a man of four and twenty, and a blooded warrior besides. “If anyone should need me to carry a message or inventory the buttery, I’ll be in the lists.” His remark garnered sharp looks, but no more reprimands. Striding out of the solar, he contemplated his situation.

He could let his family arrange a marriage for him. Mayhap he’d even come to care for whomever they chose, but would he love her? Would his heart thrill at the sight of her, as Malcolm’s did still when his lady wife entered the room? “No’ bloody likely.”       Jealousy burned a path through him, and the weight of his future settled upon his shoulders like a yoke. One more adventure—was it too much to ask?—and then he’d settle into his predestined role within the clan.

He took the stairs down to the great hall, pausing when he found his cousin’s wife there consulting with their cook, Molly. Lady True was already growing large with her second bairn, and another pang of jealousy shot through him. He wanted a family of his own, but not without love. The indignity of the scolding he’d received still stung, along with the restless desire to act. He waited until True sent Molly on her way before approaching. A plan, such as it was, had germinated in his mind for far too long. The time was at hand to put it into motion. “Good morn,

“I’m fine.” She rubbed her belly and studied him in that piercing way she had. Her abilities as a truth-sayer had saved their clan more than once, and now she turned her powers his way. “What troubles you, Robley?”

“There’s something I wish to ask. A favor.” His resolve firmed. The more he thought about it, the more powerfully the notion took hold. “Do you have a moment to walk about the bailey?” He offered his arm.

“Of course. I always have time for you.” She grinned and took his arm. “If it’s within my power to help, you know I will, but I sense whatever it is will be met with opposition from our family.”

“Aye, which is why we will keep it between ourselves.” He led her out the door. Deep into summer, the air was warm, and the sky held fat clouds to offer shade from the hot sun. “Do you recall the time I helped you secure weapons against Malcolm’s wishes?”

“Of course I do.” She laughed. “And now you plan to use that to leverage a payback?”      “If it will help.” He drew a breath, gathering all of his courage and determination. “I wish to visit the future. Nay, that does no’ describe what I feel.” He shook his head. “It’s something I must do, and I canna free myself from the certainty that I’m meant to go there for some reason.”          Her brow furrowed as she studied him once again. “It’s possible that what you feel is a form of manipulation.” Her expression filled with concern. “You know I don’t have the power to send you to the future, nor do I have the power to prevent you from trying to get there on your own.

“Madame Giselle sought me out because of the little bit of faerie blood running through my veins. You know how Giselle loves to meddle. Had it not been for her, I would still be living my life in the twenty-first century.” She squeezed his forearm. “I sense she might be stirring the pot here, and you can’t trust her. Be careful.”

“I ken well enough the fae canna be trusted, but . . .” Their clan had ties to the fae, especially Madame Giselle, because Hunter, True and Malcolm’s foster son, was her direct descendant. He raked his free hand through his hair, unsure how to put words to what stirred within him. “Giselle cares for you, Hunter and your daughter, aye? When she brought you to us, ’twas for good. Think of the lives you’ve saved, True. Mayhap her purpose now will also be for the good of our clan. Did you no’ tell us when we needed help, help would come to us? Was that no’ the vow Giselle made to you and Malcolm?”

“Hmm. ‘When you need help the most, help shall find you,’ is what she said. More like a benediction than a vow, and not necessarily directed at our clan as a whole.” She placed her hand protectively over the bairn growing inside her. “I might be all wrong about her having anything to do with your compulsion. Your desire may stem from your own curiosity about my time and nothing more.”

“I dinna ken, nor do I care. The future is all I’ve thought of since you shared with us the truth of your journey here. Are you no’ tired of my pestering you for more of your tales?”     “I am, and your relentlessness is the reason I suspect Giselle is behind it. You’re not normally obsessive about anything.” She shook her head. “And you know when I sense the hidden truths in any given situation, it’s wise for all of us to listen—including me. My abilities have never led us astray, have they?”

“Nay, your abilities have saved lives, mine included. Whether ’tis compulsion or no’, if Giselle is still to be found in Inverness, I will see her. There’s naught you can say that will prevent me from doing what I must. The favor I ask is that you help me prepare.”

“There’s no guarantee Giselle will send you anywhere but out her door.” She brought her thumbnail to her mouth, a sure sign she gave serious consideration to his request. “Malcolm is going to kill me for sure this time.”

Triumph surged. “Do you still have the paper currency from your time? That and information are all I seek. My cousin canna be angered by a simple exchange of knowledge, can he?”

“Can’t he?” Her brow rose. “This is my husband we’re talking about. Overbearing, controlling and arrogant to the bone.”

He winked at her. “Dinna tell him.”