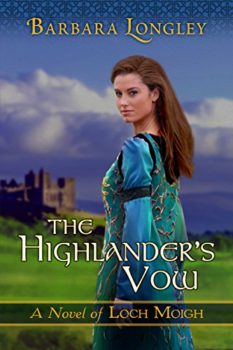 On the eve of her wedding, Sky Elizabeth, the earl of Fife’s eldest daughter, learns of her betrothed’s murderous plot against her. As she flees, Sky falls through a mysterious portal in time, landing at the feet of a twenty-first-century American knight.

Struan, the bastard son of the earl of Sutherland, escaped death through time’s portal once. Recognizing what has befallen the frightened woman, he vows to protect her even while Sky, with a trace of fae blood in her veins, senses his resentment.

Despite their growing attraction, she’s determined to find a way home to avert a clan war. Though he cannot deny his desire, he fears that helping her return to the past will surely lead to his demise. As the two work together, passion ignites and an unbreakable bond forms—but will it be enough to sustain them through the perils they’ll face in the past? Can their love have a future?

Weary of travel and sore from sitting upon her palfrey’s saddle-clad back, Sky Elizabeth shifted yet again, trying to ease her discomfort. She shivered against the damp chill, and her gaze strayed to the keep looming against the distant horizon. The sight of Kildrummy Castle, soon to be her home, brought her no joy, and her heart grew heavy at the thought of her betrothed.

Sir Oliver of clan Erskine did not want her any more than she wanted him, and thanks to her accursed fae gifts, Sky could not pretend otherwise. He could not hide his true feelings behind good manners or honeyed words. Faced with naught but a life of loneliness amidst strangers, ’twas duty alone that compelled her forward.

“Just think, Sky.” Helen, her younger sister, nudged her mount ahead so the two of them rode abreast.

“You’ll be a bride within a fortnight. I envy you. Your betrothed is young and quite pleasing to look upon.”

Her sister’s dreamy-eyed expression served only to deepen Sky’s misery. “I’ll gladly trade places with you, Helen. You may marry the earl of Mar’s grandson, and I shall remain at Loch Moigh.” For the rest of my days.

A lump rose to her throat. Indeed, had it not been for the passing of her grandsire, the old earl of Fife, following so closely upon the loss of her great-uncle, she would already be Oliver’s wife. She’d been granted a reprieve, and now ’twas at an end. “I am nearly one and twenty, well past the age most ladies of noble birth marry. ’Twould please me well enough to remain unwed.”

Like her, Helen had a trace of fae blood running through her veins, and she too could discern truth from lie. With the exception of her younger brother Thomas, all of Sky’s siblings, including her foster brother, Hunter, were “gifted,” as her mother would say.

“Nay.” Sky shook her head. “I want to become a healer and a midwife like cousin Erin and

Ma, only without the additional burdens of a husband and bairns.”

Quick and sharp, a yearning cut through Sky’s heart, and just as quickly she closed herself off from the unwanted emotion. She could not hope for bairns, not if it meant they’d be burdened with the same fae traits she carried. Hiding her gifts took a heavy toll. ’Twas exhausting, and the price of being such an oddity carried far too great a risk.

Only ensconced within the bosom of her clan and kin did she feel safe. At Loch Moigh she could be her true self, and that was where she wished to remain.

“Hmm.” Helen frowned. “Mayhap you and Oliver will come to care for one another with time, aye? And you can practice your healing arts with the Erskine clan as well as you can with ours.”

“Mayhap.” She doubted time would have any effect on how she and Oliver felt for one another, and she kent well enough she could only practice her healing arts if her husband granted his permission for her to do so. She would soon become the future countess of Mar, and ’twas not considered seemly for a countess to attend the births of commoners, or to act as a village wisewoman, setting broken bones and tending the sick.

Sky turned her attention to the surrounding hills, already showing hints of green from the early spring rains. This late in the afternoon, and with the sun hidden behind heavy clouds, the Grampian Mountains appeared a dark bluish-gray. How fitting. The day she arrived at her new home should be dull, gray and dismal.

Blinking against the sting in her eyes, she looked to her da and ma, who rode at the head of their party. David, the elder of her twin brothers and heir to the earldom, took his place behind their parents. Sky’s sister rode beside her, and their entire party was flanked by a score of MacKintosh guards.

“We shall arrive before nightfall,” Helen said. “’Tis certain Owain regrets ’twas he Da entrusted with the clan’s well-being whilst we are away. He so loves travel and adventure.”

“Aye, that he does, and when he canna find adventure, he’s sure to stir up mischief for his own amusement.” Sky shook her head, remembering some of her brother’s antics from the past. “For certes, ’tis why Da chose to leave him behind to look after things at home. Owain needs to settle down and take his responsibilities more seriously, and with no one else at Moigh Hall but him, he’ll be forced to shoulder the burden of looking after the clan. I trow he’ll have no time for aught else.”

Their youngest sibling, Sarah, had also remained at home, so their granddam would have company. And Thomas, her youngest brother, was fostering with Hunter, who was now the baron DúnConnell. ’Twas too close to the birth of their second bairn for Lady Meghan to travel, and they’d not be attending the wedding.

A wave of sadness engulfed her. Of all her siblings, ’twas the twins she’d miss most, for they embodied all the qualities she lacked. Her brothers were bold and fearless, whilst she lurked in the periphery, watching their antics and longing to have but a small portion of their audacity.

Nay. ’Twas not in her nature to be adventurous or daring. She was the dutiful daughter, the proper lady, demure and acquiescent. Safety and security meant far more to her than adventure. Glancing once again toward Kildrummy, the keep’s Snow Tower growing ever larger, she contemplated the merits of a sudden declaration to take vows and don the veil at the nearest abbey.

All too quickly the distance between her kin and the portcullis of Kildrummy Castle disappeared. Once through the barbican, they were met by a festive gathering, led by Lord Robert, the earl of Mar, his lady wife and Oliver, Sky’s betrothed.

Several guests in residence for the wedding filled the inner bailey, and Sky’s senses were assaulted by a myriad of emotions: curiosity, excitement, resentment and . . . jealousy? Searching the faces around her, she sought the source of the resentment and envy, for those powerful emotions emanated from a single individual.

“My lady.” Oliver reached up to help her from her mount as a stable lad took the reins.

Placing her hands on his shoulders, she slid off her mare’s back and into his arms. This is when my heart should flutter, yet I feel naught. And from Oliver? Resignation. Peering into his blue eyes, she searched for the merest ember of warmth and found only indifference. “My thanks, Sir Oliver.”

“How was your journey, my lady?” He took her hand and placed it within the crook of his elbow. “Did you encounter any difficulties along the way?”

“Nay. Our journey was quite uneventful.” Her parents were busy exchanging pleasantries with the earl, and her brother and sister stayed close beside them. Having similar fae abilities as she, her siblings must also be suffering the onslaught of feelings swirling through the air.

She and Oliver were alone at the outer edge of the throng. Now was the time to beg him to release her from a bleak future devoid of love—or even the slightest wisp of affection. Sky cast a glance his way, racking her brain for some legitimate reason why they should not wed—and failed. Not for the first time she cursed her rank. Duty and obligation to her kin and clan weighed heavily upon her, a burden she could not be free of without causing an outright feud between the Erskines and MacKintosh.

Once again a surge of jealousy reached her. Sky surveyed the people milling about and met the glare of a young woman. “Who might that lady be, my lord?” She tilted her head in the direction of the flaxen-haired lass standing by a portly older man. By the look of the two, they were kin to one another.

“Hmm?” Oliver followed her line of sight. “Ah, that is Lady Alice, the daughter of baron Lumsden, who stands beside her. They are our nearest neighbors to the east.”

Sky sensed Oliver’s pulse quickening as his gaze lingered upon the lass. He couldn’t hide his desire for Alice, nor could he mask the warmth filling his eyes. No wonder Lady Alice suffered envy and resentment toward her. The two are in love.

Sky gasped at the revelation. She now had a way out of her unwanted marriage. All she need do was arrange time alone with Oliver, and she could talk him into approaching their parents together. Once they convinced all involved that there would be no animosity over yet another broken betrothal between their clans—her father and the earl of Mar’s daughter being the first more than a score of years past—Oliver would be free to marry Alice.

She’d be free to return to Moigh Hall, her true home. Her heart’s desire to continue learning the healing arts could finally be realized. She’d remain in the service of her beloved kin and clan. Aye, ’twas the perfect solution. Surely her betrothed would be as relieved as she to find himself free of the unwanted union.