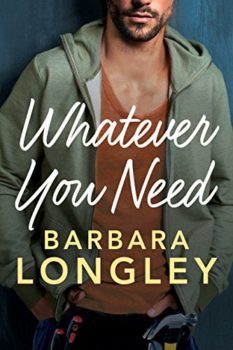 Painfully shy electrician Wyatt Haney is a pro at complex wiring jobs, but when it comes to women, he just can’t seem to make a lasting connection. If he had even half the courage of the superhero he penned for his comic book series, he’d finally be able to talk to his beautiful neighbor, Kayla—and stop hiding behind a hoodie. When an electrical fire breaks out in Kayla’s apartment, Wyatt comes to the rescue, sparking an attraction neither of them expected.

Kayla Malone has had enough surprises. First an unplanned pregnancy at eighteen, then losing her husband in war, and now a fire in her apartment. Thank God her hot neighbor has the skills to help. As Wyatt repairs Kayla’s apartment and forges a relationship with her son, he also makes inroads to her heart. It’s clear that Wyatt has fallen for Kayla, but is she willing to risk another heartbreak—or will she ignore the electricity between them and miss her happy ending?

Wyatt sat at his drawing table and worked on a panel for his latest comic book series. Elec Tric, his super hero, had been hit by an otherworldly bolt of lightning one sunny day. Twice. Since then, he’d been able to generate his own electricity. Even stranger, an unseen world of demons and super beings had become visible to him from that day forward. Tric had been forced to make a choice: join the forces of evil who intended to reign supreme over the innocent inhabitants of earth, or join the forces of good who kept the evil at bay.

“Join me, Tric, or I will destroy you,” commanded Delilah Diabolical, the demon queen.

“One demon down; three to go.” Tric pivoted to shoot a bolt of deadly electricity at his archenemy. He couldn’t destroy her, but he managed to send Delilah reeling, which bought him enough time to obliterate her remaining minions. ZAP! SIZZLE! ZAP-ZAP! Gone.

Wyatt finished inking in the bolts of lightning shooting from Tric’s hands and eyes to where the superhero had reduced another pesky lower-level demon to a pile of glowing embers and ash. Then he moved on to the next panel, and a new challenge for his superhero.

“Help!” a pretty blonde cried, as two of DD’s minor demons attempted to drag her off to the underworld.

“Somebody, please help me!”

Elec Tric once again rushed to rescue the Mysterious Ms. M, which gave the superhero pause. Why did fate keep throwing the pretty blueeyed blonde in harm’s way? In his way. Was she another distraction sent by the evildoers to keep him from finding out what they were really up to? If not, what did the demon realm want with Ms. M?

Wyatt grinned. Sometimes his stories played through his mind like cheesy movies, and when that happened, he was in the zone. Nothing made him happier than working on his comic books while in the zone.

Noise at the back door leading to the parking lot pulled him out of his imaginary world. He rose from his stool and moved to glance out the window. There she was, the blonde who lived in the apartment above his—the pretty neighbor who’d been his inspiration for the Mysterious Ms. M. Her little boy carried a jug of laundry detergent, while K. Malone—he’d read her name on the mailbox more than once—lugged two large plastic tubs full of laundry, one stacked on top of the other.

K. Malone did her laundry every Saturday morning. Wyatt knew this because he took the opportunity to observe her as she left. And every Saturday morning he wondered the same thing: How would she react if he ran downstairs and out the back door to help her with her heavy load? Would she turn her thousand-watt smile his way, introduce herself and ask if he’d like to get together with her soon? He wished. Oh, how he wished.

Longing stole his breath, and he moved back from the window—as if K. Malone might be able to see him watching her from his apartment. “Curse this wretched shyness,” he muttered in his best cartoon character voice.

He peered out the window until mother and son drove off to the laundromat. Letting loose a heavy sigh, he returned to his drawing table and immersed himself in his made-up world of alter ego, heroic deeds and feats of superhuman strength. It sure beat losing himself in his usual diatribe of self-castigation.

A couple of hours later, Wyatt got up to stretch. He’d finished the panel he’d been working on, and his stomach had been grumbling “feed me” for the past fifteen minutes. He walked to the kitchen to make a turkey sandwich, when he smelled . . . smoke? A second later, the fire alarm went off in the kitchen above his.

“Cripes.” K. Malone’s apartment was on fire. Wyatt took his cell phone from his pocket and dialed 911. As he gave the dispatcher all of the pertinent information, he grabbed the fire extinguisher from under his kitchen sink. Snatching his keys from the table on the fly, he dashed out into the hall and down the stairs to the caretaker’s apartment.

He pounded on the door and listened for signs of life from inside. No movement. Not a sound. He tried once more just to be sure. “Floyd!” he shouted, getting no response. “Shit.” There were three floors with four apartments each. Wyatt took the stairs three at a time, racing to the top floor. “Fire. Get out!” he pounded on the doors of each apartment. “Fire!”

“What the hell, man?” The old hippie guy who wore his long hair in a ponytail, even though he was bald on top, walked out into the third-floor hall in his shorts, no shirt and barefooted.

“There’s a fire on the second floor. Get out. As old as this building is, it’s going to spread fast.”

Extinguisher still in hand, Wyatt dashed down the stairs and did the same on each floor. Then he ran back up to the third floor and herded his neighbors along until he was sure every last person in their twelve-unit building was out the door.

The blare of sirens reached their quiet street, and by the time he made it to the sidewalk, the engines were close. Two trucks with red lights flashing pulled up to the curb next to the hydrant on the corner. Wyatt stepped forward to meet the firefighter who appeared to be directing the crew. “The fire is in the apartment on the southeast corner of the second floor.”

“Your place?” the fireman asked, as the rest of the crew scrambled with gear and attached a hose to the hydrant on the corner.

“No, my neighbor’s. She’s not home and neither is the caretaker. Otherwise I would’ve tried to put it out myself.” He lifted his extinguisher. “I’ll open the security door.” Wyatt ran to unlock the dead bolt. He held the door wide as two firefighters rushed in, dragging the hose with them. “It might be electrical,” he called after them.

“Got it covered,” one of the two firefighters following the first pair told him. They had canisters strapped to their backs and axes and crowbars in their hands.

“Stay out of the building until we give the all clear,” the firefighter in charge yelled.

Wyatt cringed at the sound of K. Malone’s door being hacked open, but what choice did the firefighters have? Floyd had the master keys, and he was nowhere to be found. As usual. The guy was so lame. He did a piss-poor job of keeping the place up, and Wyatt often smelled pot smoke coming from the caretaker’s basement apartment. He’d turned Floyd into a sluglike demon in his comic books. Might be time for Elec Tric to turn that particular demon into a pile of ash.

Wyatt had complained to Floyd about the wiring in the building several times, and each time he’d asked him to contact the owners about the danger. He’d noticed right off the building didn’t come close to meeting code. When his requests failed to produce the necessary updates, Wyatt had resorted to sending letters to the city. When that proved to be unproductive as well, he’d done some research through city tax records and sent letters to the holding company in Chicago that owned the building. That got him nowhere either.

If his suspicions were correct, and the fire started because of the faulty electrical wiring, something had to be done. What if a fire broke out in the middle of the night when everyone was sleeping? He couldn’t count on all the ancient battery-operated smoke detectors to work. His hand went to the scars on his neck, ear and jaw. Burns were excruciatingly painful, and things happened so fast. He didn’t wish that kind of misery on anyone.

“Hey,” one of his neighbors said, coming to stand beside him. “You’re the hero of the day. I’m Mariah Estrada,” she said. “Thanks for pounding on my door.”

Hero of the day? He hadn’t really done anything heroic. No people, puppies or kittens had been pulled to safety from a building engulfed in flames. Still, the words trickled through him in a pleasant rush. “No biggie.”

“I’ve seen you around. You live in the apartment beneath Kayla’s. I guess you heard her alarm go off, huh?”

Wyatt nodded. Kayla. Kayla Malone. He liked the way the syllables rolled around in his head. The Mysterious Ms. M had a name to go with his fantasies, a name that would lend itself well to a heroine in his comic books. Maybe he’d give her superpowers in the next story.

“You gonna introduce yourself? I know you only as Hoodie Guy, because you always have that hood up even when it’s hot out. Like today.”

Heat crept up his neck, and he tugged said hood forward. Did the rest of the residents know him as Hoodie Guy too? Great. His neighbors probably thought he had a few loose wires. He couldn’t help himself. The hoods were a habit he couldn’t break. That’s all. Glancing at her, he expected to find derision. Instead, her espresso eyes held only a teasing sparkle. “Wyatt Haney,” he told her.

Not knowing how to respond to that, he nodded again, and other neighbors drifted over, thanking him for alerting them to the fire. The two silver-haired ladies who lived on his floor even patted his shoulders. Face flaming, he nodded, mumbled and edged away as best he could. He even pulled out his phone, pretending he had important texts to read, so they’d leave him alone. What he wanted right now was to go into the apartment above his to see where the fire had been and to discover the cause.

Of course he couldn’t do that, not without Kayla’s permission. His heart thumped. Dammit, he’d find a way to ask her, because if he was right about what caused the fire, Wyatt intended to raise a ruckus. Something had to be done about the substandard wiring in their building.

All he had to do was find out which insurance company to contact, and he’d mention the many letters he’d sent to the owners. He’d even provide copies and pictures. Then he’d have his family’s company, Haney & Sons Construction and Handyman Service, bid on the job. The outlets weren’t even grounded, for cripes sake.

His heart thumped again. Harder this time. If he got the job, he’d be spending time in his pretty neighbor’s apartment. If he had any luck at all, she might be there some of the time, and maybe . . . just maybe . . . he could muster up the courage to ask her out.

Other Books in The Haneys Series