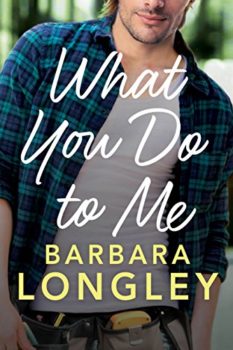 What You Do to Me

Whether it’s repairing a home or taking care of clients’ other needs, Twin Cities handyman Sam Haney is in demand from his mostly female clientele. Despite Sam’s lothario reputation, love isn’t part of his portfolio. He’s built a lot of walls in his time, but the one that’s surrounded his heart ever since the death of his parents is his most solid yet.

Haley Cooper has had enough heartache for a lifetime. Her high school sweetheart up and moved to Indonesia—alone—just two weeks before their wedding. Her mother thinks it’s time for Haley to move on and contracts Sam to work on Haley’s wreck of a house—and anything else, if he’s got the notion.

Sparks fly and passion ignites. But Haley isn’t into Sam’s ‘love-em-and-leave-em’ act. She wants something more. Fixing a house is one thing, but for this handyman, building a relationship will need a whole different set of skills.

Brrr. Thermal coffee cup in hand, Sam walked out of his apartment building and crossed the parking lot. He huffed out a breath, and a cloud of steam formed in front of his face. Minnesota winters were frigid, and the frigid had started early this year. They’d already had a couple of near-freezing nights, and it was just the beginning of November.

If it weren’t for hockey, snowmobiling and ice fishing, he’d consider moving south. But then he’d miss Grandpa Joe and Grandma Maggie, along with his younger brother and sister, cousins, uncles and aunts. His siblings might be willing to make the move with him, but his grandparents would never leave Saint Paul. All of their kids, grandkids and great-grandkids were here, which meant he was stuck.

Sam circled to the driver’s side of his old Ford work van and climbed in. Turning the key in the ignition produced nothing but a reluctant RrrrRrrrRrrr. “Come on, buddy. I don’t like the cold or Monday mornings either, but you don’t see me staying in bed.” He patted the dashboard, like that would somehow encourage the van to start. He tried again and got the same refusal. “I’ll let you think about it for a minute or two, and then you have to crank. We have work to do.” He waited a few moments and tried again. The engine turned over, earning another pat to the dashboard.

Content to sit while the engine warmed, Sam sipped his coffee and turned on the radio. He had plenty of time before he needed to show up for work, and his favorite morning talk show was about to begin. He tuned the radio to Loaded Question and adjusted the volume so he could hear the radio over the heater fan and grinned as the cheesy music announced the morning show was about to begin.

“Well, Russ, I think we have a real winner this morning. Today’s question is: What’s the sluttiest thing you’ve ever done?”

This ought to be good for a few laughs. Sam adjusted the vents so they blew only on the windshield. He could get out and scrape off the ice, but why bother? The glass would just frost up again by the time he was back inside. Better to let the van warm up and defrost on its own. Grandpa Joe always said there were two kinds of people in this world: smart lazy and dumb lazy. If you’re smart lazy, you do things right the first time, so you don’t have to do them over again. Smart lazy. That’s how Sam saw himself.

“Whoa! Good one! What is the sluttiest thing you’ve ever done, Dianna?”

“Ahhh.” She laughed. “Spring break five years ago. No details.”

Their banter went on for another few minutes before the DJs announced their telephone number and turned it over to the listening audience. Since the talk show hosts often gave out some pretty sweet prizes—like hard-to-get concert tickets or cash—Sam had the number in his speed dial. He hadn’t won anything yet, but he wasn’t about to give up. For the next few minutes he listened to one outrageous story after another, choking on his coffee when laughter sent it down the wrong pipe.

A husky, feminine voice came over the air. “Hi, my name is Yvonne.”

Her voice sounded familiar, and her name . . . “Nah. Couldn’t be.” “I’m recently divorced, and I kept the house,” Yvonne finally blurted.

“I had a few things that needed to be done around the house, and a couple of my girlfriends kept telling me I should hire this handyman named Sam. So I did.”

Sam froze, and not from the cold. “Cripes!” It was her. He’d done some work for Yvonne two weeks ago. He thunked his head against the steering wheel and groaned. “Great. I’m the sluttiest thing she’s ever done.”

“OK, Sam the handyman,” Russ teased. “Tell me. Just how handy was he?”

“My oh my. Let me tell you. He was plenty handy and incredibly hot. After he did the job, I did him.” She sighed. “He was wonderful.”

Yvonne’s happy sigh over the air brought a smile to his face. He should get an award for leaving customers completely satisfied, something like those Employee-of-the-Month plaques you see on walls sometimes. He imagined what his award might look like hanging on the wall at Haney & Sons. Polished brass mounted on an oval piece of oak, and the engraving would read: Sluttiest Carpenter Award of Excellence—for going above and beyond the call of duty.

“You were plenty hot yourself, Yvonne.” Maybe she’d have another job for him to do soon. He shook his head. Not a good idea. Women got ideas when he came around a second time—relationship ideas.

He shuddered at the thought. His life was exactly the way he wanted it. Who needed all the drama, all the demands and upheaval that came with the whole relationship package? Who needed the heartache? Not him. Strings-free, protected sex and the bachelor life suited him just fine. He had his buddies, his brother, sister, grandparents and a great extended family. He lived la dolce vita—the sweet life. Why fix it if it ain’t broke?

Listeners were weighing in about Yvonne. About him.

“It would bother me knowing my partner had probably done it with half the women in the Twin Cities,” the first listener commented.

“He’s the slut,” another caller said.

“Yvonne was just a lonely divorcée. Maybe he’s a sex addict. For all we know, she was just one of a dozen he did that day,” caller three remarked, sending Sam over the edge.

“Sex addict?” He scowled at the radio. “Wait just a doggone minute. I’ve done nothing wrong.” Before he realized what he was doing, he’d grabbed his phone from the cup holder and hit speed dial. His outrage grew with each passing second. He was a good guy, honest and upfront. He never led anyone on. Plus, his moral compass worked just fine, thank you very much. His call was answered on the fifth ring.

“This is Russ, and you’re on the air. What’s the sluttiest thing you’ve ever done?”

“Yeah. This is Sam Haney. I’m Yvonne’s handyman, and—”

“Whoa! No last names here, Sam Haney. We like to protect the innocent, Handyman Haney. Did you get that, ladies? Sam Haney, the handsiest handyman in the Twin Cities.”

“Hands-On-Haney, the handyman!” Dianna chortled with glee, and the two of them laughed. “Get his number for me, would you, Russ?” Dianna chimed. “As a matter of fact, Sam, why don’t you share your number with all of us?”

Aww, cripes. Idiot. Their jokes were stupid, and he didn’t appreciate being the punch line. “Listen, you wouldn’t believe how women throw themselves at me on the job. I can show up for work scruffy as all get-out, raggedy flannel shirt, faded torn jeans, unshaven and hair a mess, and they’re still all over me. Women love me.”

“I’m sure they do,” Russ said, and both hosts sniggered lewdly.

The word cliché popped into his brain. He shoved it aside. There was nothing clichéd about him. He just needed to find a different morning talk show, that’s all. “Look, I don’t mess with married women, or women who are involved with someone, and it’s not me who comes on to them. They come on to me. We’re consenting adults, enjoying a little safe, recreational sex. That’s all there is to it. No addiction. No taking advantage. Nobody is getting hurt. I’m unattached, clean, healthy and a decent guy. Can I help it if women want me?”

Other Books in The Haneys Series