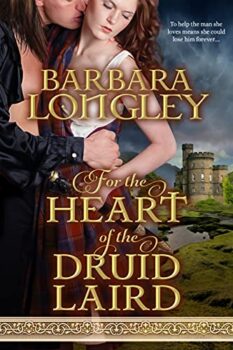 For the Heart of the Druid Laird

Cursed with immortality, Dermot MacKay craves death. To lift the faerie curse placed upon him and his men over 1,600 years ago, he must return the soul of his reincarnated wife to the exact place and time of her murder. But her soul is currently residing in the very modern Sidney St. George—and first he has to convince her to accompany him to Scotland.

Sidney doesn’t believe Dermot’s wild claims of immortality and rebirth, yet she cannot deny that she is drawn to the sexy Scot. Nor can she explain the sense of déjá vu his touch elicits. Desperate for answers, she agrees to go with him—only to learn too late that to help the man she loves is to lose him forever…

The contents of Dermot MacKay’s coffee mug mirrored his mood—black, like the endless days stretching before him without surcease—and bitter, like his thoughts.

“Will you no’ eat something, Laird? You canna train on an empty stomach.”

“Nay, Lachlan. Have you forgotten?” Dermot surveyed the men around his table tucking into their hearty breakfasts. “I’ve been fasting since twilight last and will no’ join you in the gym today.”

“I’ve no’ forgotten.” Lachlan shrugged. “We’ve no reason to expect the outcome will be any different this year.”

“Where is Thomas?” Dermot watched the men’s furtive glances dart around the table like mice after crumbs. No one answered. They knew he wished to avoid his cousin. At this time of year Thomas’s antics grated, and running him through with a sword, though immensely satisfying, only incited Thomas to more mischief. Dermot’s frown deepened at the sound of footsteps. “Shite.”

Thomas sauntered into the dining hall and helped himself to a plate from the sideboard. He heaped it with fat sausages, scrambled eggs, warm currant scones with honey-butter, and fried tatties with onion, all Dermot’s favorites. His cousin faced him with an expression of smug anticipation. Swinging the loaded plate under Dermot’s nose, he took a seat.

“Have you done the deed yet, Druid?” Thomas raised an eyebrow and fixed him in his gaze.

Dermot inhaled the delicious scents wafting up from Thomas’s plate. His stomach rumbled. Another pointless fast, followed by an equally fruitless ritual, and for what? He didn’t expect the outcome to be any different either. He swallowed the saliva filling his mouth. “How many times have I told you no’ to call me Druid?”

“Let me see.” Thomas pulled the stub of a pencil and a tiny notebook from the rear pocket of his jeans and flipped it open with a flourish. “We’ve been together for sixteen hundred and fifty years, give or take a few decades. That’s three hundred sixty-five days per year, except leap years of course.” He tapped his chin with the pencil. “Let’s say you’ve told me three times per day, a conservative estimate.” He scribbled furiously, his brow furrowed in concentration. “It comes to one million eight hundred thousand times, or thereabouts.”

Laughter erupted around him. Dermot glared his men into silence.

“Well?” Thomas persisted. “Have you done the deed yet, Druid? Wait, that’s one more time you’ve told me today.” He solemnly added a tally to his notebook, eliciting choking sounds from the men at the table.

Launching himself from his chair, Dermot snapped, “I’ll do it now.” He stormed out of the dining hall and climbed the massive stone steps two at a time. Striding down the corridor on the second floor, he headed for the one place in his home he’d devoted to the Druidic arts.

The moment he opened the door to his stillroom, the earthy scent of dried herbs and beeswax soothed him. Early morning light poured through the tall beveled windows, lighting the patina of the polished oak bookshelves to a warm gold. He ran his hand along the leather spines of his ancient tomes and rare first editions and pulled one of the books from the shelf. Taking a seat in his favorite chair, he let the book fall open in his lap. How many times during the span of his life had he held this book in his lap? He glanced at the dried medicinal herbs hanging from the rack, and on to the rare works of art gracing the walls.

Shite. He’d miss this refuge, but if Mairéad didn’t show again this year, they’d have to think about relocating soon. They’d been in Gairloch over a decade, and it wouldn’t be long before the locals noticed he and his men weren’t aging.

Gods, he longed for an end. If he had any say in the matter, once the damned curse was lifted he’d refuse another incarnation for at least a millennium. Surely he’d earned the rest.

Procrastination isn’t going to change the outcome. Best get the deed done.

He rose from the chair to put the book back in its place and took a deep breath, letting it out slowly. With a wave of his hand, sacred herbs and beeswax candles took flame. Fragrant spirals of smoke drifted throughout the room as he mentally prepared himself for the task ahead. A map of the world lay flat on the large granite-topped work table, and the scrying crystal nested in its velvet-lined box awaited his magic. He cleared his mind and meditated upon the soul he sought.

Turning his focus inward, he reached deep into his soul to call forth the magic lying dormant within all sentient beings. Speaking the words of the chant, he slipped between this realm and the realm of shadow, where all souls were connected. Only on Samhain, halfway between the autumn equinox and the winter solstice, was he allowed to breach the veil between the worlds to search for Mairéad’s return.

Inured to the cold-feather touch of spirits brushing against him, Dermot closed his mind against the onslaught of random consciousness. Nothing could distract him from his purpose. He lifted the silken cord fastened to the scrying crystal, the unique image of Mairéad’s spirit fixed in his mind’s eye. With a slight motion of his wrist, the crystal circled above the map in a wide arc, narrowing with each swing.

The cord tightened and strained in his hand. His concentration faltered and his heart raced. Nay. It couldn’t be…not after all this time. Taking a deep breath, he eased the slack and continued the spin in smaller turns. The crystal affixed itself to a single spot in the center of North America. Shock reverberated through his body as powerful magic exploded from the scrying crystal through the astral plane. The signal had been sent. Àine and the high king of the Tuatha Dé Danann would know he’d found her. The race had begun, and he had only this one chance to end the curse, or he and his men would remain as they were for all eternity.

He’d waited so long for this moment he could scarce believe what his senses told him. He’d found her. Memories dragged him back through the ages. The heat of his burning keep. The image of Mairéad lying in a pool of her own blood. He choked, remembering the thick, black smoke and the smell of burning flesh. The battle sounds and the cries of the dying echoed inside his skull until he feared it would explode.

Sixteen hundred years’ worth of frustration and rage welled up with his bile, scalding his throat and filling him with bitterness. If mankind ever needed proof romantic love was nothing but folly, he had it to give. Mairéad swore she loved him, and the foolish notion led to her murder and the death of their precious unborn child.

He threw his head back and shouted a call to battle loud enough to wake the dead.

He swiped the world map off the table and snatched another—the United States—spreading it out on the table. Again he scried, and again the prism stopped. He leaned close. Saint Paul, Minnesota, an ocean and half a continent away.

A dozen pairs of boots thudding in the corridor brought Dermot back fully into the material realm. He moved to intercept his men at the door. “Niall, I need a large, detailed street map of Saint Paul, Minnesota in the U.S. Thomas, you’ll make the travel arrangements. I’ll take four of you with me. We’ll stay no more than a fortnight.” Dermot looked into the stunned faces of his men. “She is reborn. At long last Mairéad has returned.”

Dermot rubbed his temples. His head throbbed as it always did after he’d used magic. “What now, Thomas?”

“She canna be even a year old. How do you plan to get the bairn back to Scotland? We’ve only three weeks until the anniversary of Mairéad’s murder, and Áine—”

“Then we have no time to waste, do we?” He scowled at his cousin. “I’ll offer the family a vacation to a bonny Scottish castle, or throw an ungodly sum of money their way. I’ll do whatever it takes. You have my word.”