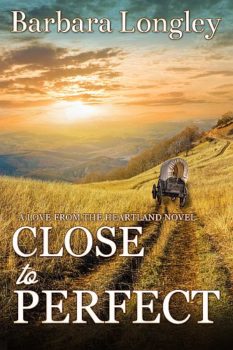 The long awaited prequel to the award winning Love from the Heartland, Perfect, Indiana series.

She gave her promise to one man, and her heart to another, and now that her past has found her, she must choose between her word of honor, and her heart’s desire.

After losing everything during the war, Mary Stewart is haunted by tragedy and loss. She longs to leave Atlanta behind. Her fiancé—who was bound for Houston, Texas—has left her without a word for more than a year, and she fears the worst. When she learns of Tobias Lovejoy’s plans to lead a wagon train to Texas, she’s determined to join him. She’ll either find her fiancé, or she’ll discover what became of him. Until then, she cannot move on with her life, and her growing attraction to Tobias Lovejoy weighs upon her conscience.

Tortured by his past, Tobias Lovejoy longs for a fresh start in a place that holds no memories or ghosts from the war he barely survived. When Mary Stewart asks to join his wagon train, he refuses. He doesn’t want the distraction or the responsibility of having an attractive single woman in his camp. When he learns of her reasons for heading west, he relents. As he comes to know Mary better, his desire to discover what became of her missing fiancé grows as strong as hers—for entirely different reasons. Tobias wants Mary for himself. He writes to a Texas Ranger he knows, enlisting his aid in finding out what became of Mary’s errant fiancé. During their journey, Tobias and Mary learn to lean on each other through one disaster after another. Their feelings for one another grow, and passion ignites.

When Mary’s fiancé appears, wanting to rekindle what they had, the future happiness of three people hangs in the balance. She gave her word to one man and her heart to another. Now she must choose between her honor, her heart’s desire, or walking away.

RAGE DUG ITS SPURS INTO Tobias, propelling him forward and lending him strength he did not own. He shoved the barrel of his carbine behind one of the slats nailed across the frame of the charred remains of the door. Putting all his weight into the task, he pried until the plank loosened. He’d known Sherman had burned Atlanta, but knowing had not prepared him for the devastation confronting him. All that remained of his family’s mercantile, his home, was a burned-out shell of brick.

Starved, thirsty, and sweating beneath the hot Georgia sun, he leaned against the crumbling brick wall to recover from his efforts and pulled in a long, deep breath. Damn, he reeked—and itched. He’d been host to every kind of vermin imaginable for so long, he’d accepted the discomfort as normal. Hell, he couldn’t even remember a time when he wasn’t covered in bites, scabs, and crawling things.

What was today’s date? He had no idea, but judging by the sun and the heat, he’d guess late May, and it had been mid-April when he’d been turned loose from Fort Sumter. God almighty, it had been one hell of a long walk from South Carolina to Atlanta, Georgia.

Tobias pushed himself off the wall and once again levered the rifle barrel behind the plank and pulled. The screeeech of nails loosening from their moorings set him on edge, but he couldn’t let up. He needed to get to one of the caches of coin he’d buried in the cellar. Then he’d see about food, a bath, clean clothes, and a place to rest. By tomorrow he’d have a bit of strength back, and then he’d set out in search of his mother and sisters. He swallowed against the tightness in his throat. He’d had no word from his family nor they from him in over a year. Were they safe? Had they survived the war?

He went back to pushing and pulling. Finally the board dropped to the ground, and a flare of triumph lent him another burst of energy. Positioning the barrel under the next slat, Tobias set to work. The effort took what little strength he had left, and the world around him began to spin. He stopped to regain his breath, only to be tortured by the scent of bread baking somewhere down the road. His gut roiled. Sweat burned his eyes and stung the bites on his face.

Swiping his sleeve across his brow, Tobias spat into the dirt between his worn-to-almost-nothing two left boots. He blinked against the sting in his eyes, marshaled his last reserves, and wrapped his hands around the carbine again.

“Here now,” a familiar voice said gruffly behind him. “That’s private property. You’d best drop that rifle and turn around real slow. Both hands in the air if you please.”

His old neighbor didn’t recognize him, and why would he? Tobias hardly recognized himself. What if Offermeyer shot first and asked questions later? Terror gripped him, and bile rose to scald the back of his throat.

“Don’t shoot. The rifle’s not loaded.” Tobias turned slowly, hands and rifle held aloft. The muscles in his arms quivered with the effort. He peered through his matted hair at the older man aiming a revolver at his chest. “Don’t you recognize me, Ambrose?”

Hunger and fatigue conspired against him then, and spots danced before his eyes. Dizziness took hold. Tobias tried to fight the weakness, tried to remain upright, but then he got the shakes. His knees buckled, and he folded, ending up facedown in the dirt.

Tobias nodded, not even attempting to raise himself. Ambrose’s shout for help filled the air, and Tobias flinched. Echoes of the battles he’d endured flooded his mind—one brutal skirmish after another, cannons firing, rifles and muskets discharging, smoke

. . . and the constant, sickening stench of blood, unwashed bodies, dysentery, and death.

The horrors of war lived like a glowing ember deep inside him, set to burst into flame at the slightest provocation. Too many men—Confederate and Union alike—had survived the bloody battles only to perish in the deplorable prisons, where disease, filth, and starvation ran rampant. His empty stomach turned as the stink of putrefying wounds and human waste inundated his senses.

He’d nearly died more than once, but somehow, by some miracle, he’d made it home. He heard someone approach, and the next thing Tobias knew, he was being hefted by more than one pair of hands.

“Lord almighty, you smell worse’n a privy,” Ambrose Offermeyer remarked. “Let’s get some food into your belly. There’s nothing to you but skin and bones, son. While you’re eating, I’ll have the missus fix a nice warm salt bath to get rid of the vermin crawling all over you.”

“I can see things moving around in his hair, Pa.” The younger Offermeyer grunted. “A salt bath will do for the chiggers and biters, but shaving’s the only way to rid him of the nits.”

“That too,” Ambrose agreed. “Food, a bath, shaving, clean clothes, and you might just feel close to human again. And after a good rest, you can tell us where the hell you been since last we heard. We’d all but given you up for lost.”

“Where are my mother and sisters?” he croaked between his cracked lips. “Are . . . are they safe?”

“I’m sorry to have to tell you this, but your uncle passed a month ago. Your mama and sisters are still holed up on his farm and doing about as well as can be expected during these trying times. We’ll take you to them tomorrow.”

Another blow to the gut. He couldn’t even thank his uncle for sheltering his family. “I’m much obliged.”

“You were smart to send your kin off when you did, Tobias.

Atlanta weren’t no place for womenfolk under Sherman’s siege.”

All he could manage was another nod as Ambrose and Gus supported Tobias as he shuffled across the street.

“After the city burnt, your ma and uncle came back to town to see what was left of the mercantile,” Ambrose continued. “We helped salvage what we could and boarded up the doors and windows. My boy and I have been watching over your property ever since. Figured you might want to rebuild. That is, if you made it home at all.”

“Hell, you don’t owe me a thing. Your mama shared what she could with us—food, blankets, and such. We’re good.” He huffed out a wry laugh. “Not so much good as surviving.”

Ambrose and his son set Tobias down on the makeshift boardwalk in front of the butcher shop the Offermeyers had owned and operated since before Tobias was born. Squinting against the brightness of the afternoon sun, he surveyed the building. It appeared his neighbors had already rebuilt, which didn’t surprise him.

“You wait right here,” Ambrose commanded. “I’ll tell the missus to get that bath ready, and we’ll come back for you with the wagon.”

“I’ve nowhere else to go,” Tobias muttered. Leaning his head against the building, he closed his eyes. The Offermeyers had always been a resourceful, industrious family. Ambrose’s and Tobias’s fathers had been close friends. Tobias had also been close to Ambrose’s older son, Andrew. Because of the history between their two families, he trusted the older man. He’d ask Ambrose for help digging up one of the jars Tobias and his pa had buried in the cellar over the years. Only silver and gold, son. No paper promises. No banks. Only silver and gold. That’s what Papa used to say, and thank God he’d listened. Confederate paper wasn’t worth a damn. May as well keep it on hand in the privies as far as he was concerned. At least then the paper would be useful.

The Offermeyers left him. Tobias sagged against the storefront wall and sighed. He could sleep for a week, and it still wouldn’t be enough. His stomach was so empty, he swore his navel pressed against his backbone. Food. Ambrose had promised food. His mouth watered at the mere thought. He’d gone far beyond hunger and into starvation long ago. He cringed at the thought of what he’d eaten along the way home just to keep body and soul together.

What would it be like to feel safe again, to sleep in a bed between clean sheets, eat regular meals, and bathe whenever

he had a mind to? He’d been deprived for so long, he couldn’t recall what it was like to live with the comforts he once took for granted. That had been a lifetime ago, and he wasn’t that man any longer.

Other Books in A Love From the Heartland Novel / Perfect, Indiana Series